Skip to Content
Blog Faith Why It’s A Good Friday

Sometimes I share other products and companies besides my own here, such as  Amazon, etc., and I’m required to inform you that I may earn a commission if you click on or purchase what I share here. Opinions posted are always my own, though. For more info please check my affiliate disclosure.

Good Friday is the Friday before Easter Sunday, on which the Crucifixion of Jesus Christ is commemorated in the Christian Church. The day has more significance to me this year than ever before. It’s always been both the happiest and the saddest day in history, however, the fact that Jesus died on the cross between two sinners – two terrorists even – is the greatest news I can think of this Friday evening.

The Bible tells us the story in the book of Luke.

Luke 23 : 32-47 Two other men, both criminals, were also led out with him to be executed. 33 When they came to the place called the Skull, they crucified him there, along with the criminals—one on his right, the other on his left. 34 Jesus said, “Father, forgive them, for they do not know what they are doing.”[c] And they divided up his clothes by casting lots.

35 The people stood watching, and the rulers even sneered at him. They said, “He saved others; let him save himself if he is God’s Messiah, the Chosen One.”

36 The soldiers also came up and mocked him. They offered him wine vinegar 37 and said, “If you are the king of the Jews, save yourself.”

38 There was a written notice above him, which read: this is the king of the jews.

39 One of the criminals who hung there hurled insults at him: “Aren’t you the Messiah? Save yourself and us!”

40 But the other criminal rebuked him. “Don’t you fear God,” he said, “since you are under the same sentence? 41 We are punished justly, for we are getting what our deeds deserve. But this man has done nothing wrong.”

42 Then he said, “Jesus, remember me when you come into your kingdom.[d]”

43 Jesus answered him, “Truly I tell you, today you will be with me in paradise.”

The Death of Jesus

44 It was now about noon, and darkness came over the whole land until three in the afternoon, 45 for the sun stopped shining. And the curtain of the temple was torn in two. 46 Jesus called out with a loud voice, “Father, into your hands I commit my spirit.” When he had said this, he breathed his last.

I think this is among the most powerful and important scriptures in the Bible. Most of all, I think of how Jesus did all this for us. He died a brutal death for you, for me. He also completed this ultimate sacrifice for my own son, Cole (who at just 19 years old prayed to the same Heavenly Father to be delivered from this world and move on to Paradise shortly before he took his own life.)

While many people feel that suicide equals condemnation to Hell, I do not. I have unfortunately been approached with this topic by other Christians more than once since my son took his life.

To be honest, I, too, once feared this was accurate, so I have done much reading of scriptures and praying to God for truth about suicide since. I’ve concluded that I don’t for one second think that God would reject a mere boy whose heart was so tormented and whose and mind was so obviously ill. If you believe otherwise I hope that you, too, will pray earnestly for God to reveal His truth to you. 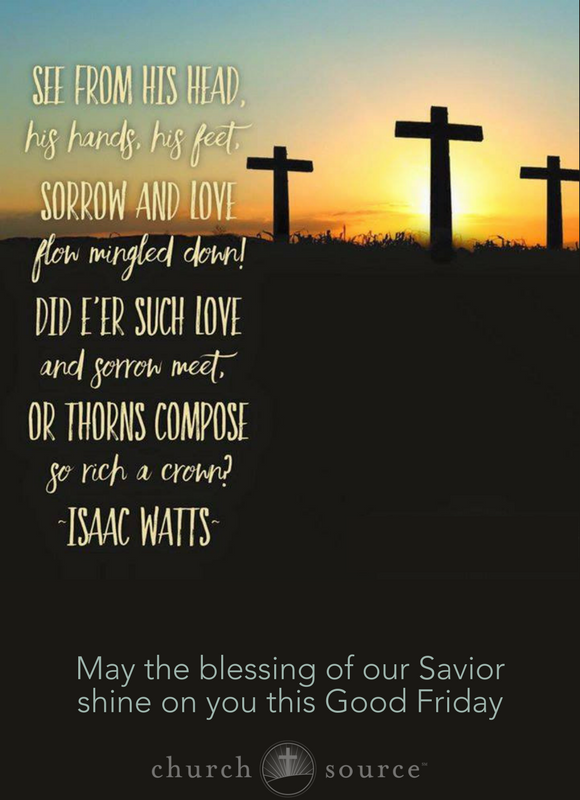 Jesus died on Good Friday so that every single sin, every shortcoming, of us mere mortals could be washed away by His shed blood and our faith in Him. He died so that our souls could continue on forever in Heaven if we just accept him.

Jesus died on Good Friday so that every single sin, every shortcoming, of us mere mortals could be washed away by His shed blood and our faith in Him. Click To Tweet

I really enjoyed this post from Thought.com about the issue It elaborates extensively on Christianity and suicide. If you have questions about Heaven and the suicide of your loved one, I hope you will read it, too.

If you are having thoughts of suicide, please get help right now. Do not delay. There is medical, emotional and spiritual healing to be found for you. Your time on earth has a purpose! Live it out!

I know I still have much work left to do here in this temporary home but PRAISE JESUS I will join Him, that criminal He died beside, my Heavenly Father AND my child again some sweet day. If you don’t know Jesus Christ personally yet, I encourage you to approach Him in prayer. Jesus loves you no matter what and He is waiting for you to lean on Him.

If this post helped you find peace as a suicide loss survivor, please leave me a comment now. I truly appreciate your support and having names to add to my prayer list.

"Do More = Live Better"
I write for believers, thinkers, makers and shakers. I'm so happy you are here!
My life has been more than a little interesting. I always say I get by on a mustard seed of faith, a little focus and lot of frappes. So, I've answered 'The call to blog' in hopes of motivating others with my experiences. I pray that I can benefit your life some way and I hope you'll take the time to connect with me somehow if I do.

Any cookies that may not be particularly necessary for the website to function and is used specifically to collect user personal data via analytics, ads, other embedded contents are termed as non-necessary cookies. It is mandatory to procure user consent prior to running these cookies on your website.